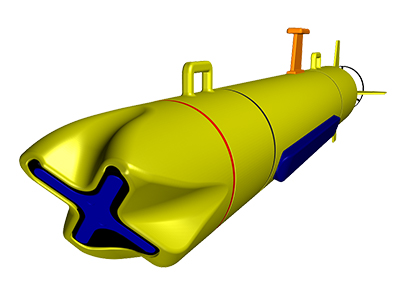 *When paired with Side Scan Sonar
Description
Klein Marine Systems is pleased to offer the first Nadir Imaging Sonar for both the commercial and military unmanned vehicle markets. The μMA-X is a highly scalable, modular system which integrates easily to most AUV/ROV vehicles. The system utilizes Klein’s next generation µEngine which is a robust, compact, low-power architecture which uses Klein BLUE technology to provide superior imaging performance.

Traditional side scan sonar systems suffers from a nadir gap in the center of the image directly under the path of the vehicle. The µMA-X system fills that gap and, when paired with conventional side scan, eliminates the need for overlapping survey lines to achieve 100% coverage. For AUV’s, this translates into extended mission durations, or shorter times to cover the same area. The key discriminator of the µMA-X is the ability to produce high-quality imagery of the nadir area that is comparable to the traditional side scan imagery. This allows for the data acquired by the system to be fed directly into existing Automatic Target Recognition (ATR) software allowing for automated detection and recognition of targets of interest.
Straightforward Integration